As a community service, VOR provides pro-bono eye care for wildlife and zoo animals. Over the last month, VOR has been working closely with the Koala rescuers to help rehabilitate some of the koalas that were affected with the recent bush fires.

In early January, we were visited by koalas Harry, Gretel and Tranmere. Harry and Tranmere both had old traumatic eye injuries which had healed to the point of being functional eyes and were both cleared to be released. Gretel had a non-healing corneal ulcer and was admitted for surgery the following day. Under general anaesthetic a corneal diamond burr debridement was performed to stimulate healing of an indolent corneal erosion. After a recheck appointment one week later, Gretel was also given the all clear to be released as her ulcer had healed. 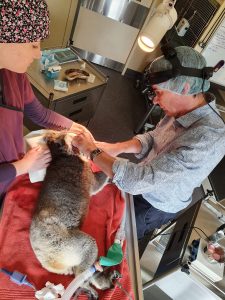 In early February we had visits from Boris and Marty. Boris was suffering from endophthalmitis in his right eye and the eye could not be saved. Boris later had this eye enucleated and is still in care at the rescue centre. Marty, who was examined for an upper eyelid laceration, was cleared for release.