You have found a hyperpigmented patch in a dog’s iris- what now? Some of these are iris melanomas but enucleation should only be considered as a last resort. At VOR we are now successfully treating many early cases with non-invasive diode laser ablation. 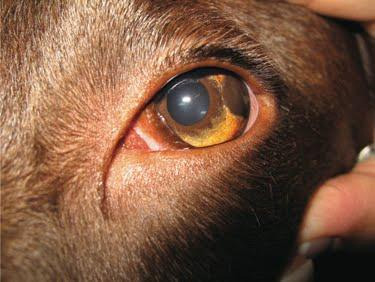 Iris freckles and nevi should be monitored under magnification every three to six months to determine if any transformation has occurred. Some iris nevi can transform into iris melanomas. While these tumours are generally confined to the globe and do not readily metastasise or pose a general health risk, they do progressively invade and destroy intraocular structures. These tumours left untreated will lead to secondary problems including glaucoma, necessitating enucleation. Iris nevi or early melanomas that are small, discrete lesions are ideal candidates for laser ablation. Laser treatment offers another option to enucleation of a visual, comfortable eye.